You are here: Home / Excerpts / Meditation Is Not What You Think: Free Excerpt from Jon Kabat-Zinn’s New Book 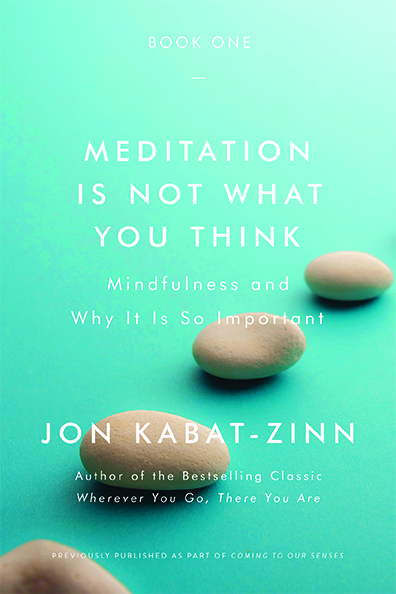 The following is an excerpt from Meditation Is Not What You Think: Mindfulness and Why It Is So Important, by Jon Kabat-Zinn, published by Hachette Books. Copyright © 2018 by Jon Kabat-Zinn.

“It is hard to notice but also hard not to notice that awareness, when we dwell within it, has no center and no periphery. In that way, it resembles space itself and what we know of the boundary-less structure of the universe.

Yet, despite Galileo, the Copernican revolution, and Hubble’s astounding discovery of the expansion of the universe in all directions from every location, we still tend to think and feel and speak as if the cosmos were centered on our little planet. We speak of the sun rising in the east and setting in the west, and that convention works very well for us in getting us through the day, even though we know full well that that is not what is actually happening at all, and that actually the planet is rotating us into and out of view of the sun. We are happy to go with the appearance of things, even though the actuality is somewhat different. Our vantage point has naturally evolved through the body’s senses, so the fall into Gaia-centrism and self-centeredness is easily understood and forgivable. It is what we might call the conventional subject-object view of the world. It is not entirely true, but overall, it works pretty well, as far as it goes. This same impulse to make a center and place ourselves in it colors virtually everything we see and do, and so it is no wonder that it also affects even our experience of awareness, at least until we peel back the conventional view we impose on ourselves, and experience it as it actually is.

Since our experience is centered on the body, everything that is apprehended seems to be in relationship to its location, and known through the senses. There is the seer and what is seen, the smeller and what is smelled, the taster and what is tasted, in a word, the observer and the observed. There seems to be a natural separation between the two, which is so self-evident that it is hardly ever questioned or explored except by philosophers. When we begin the practice of mindful- ness, that invariable sense of separation, expressed as the separation between the observer and what is being observed, continues. We feel as if we are watching our breath as if it is separate from whoever is doing the observing. We watch our thoughts. We watch our feelings, as if there were a real entity in here, a “me” who is carrying out the instructions, doing the watching, and experiencing the results. We never dream that there may be observation without an observer, that is until we naturally, without any forcing, fall into observing, attending, apprehending, knowing. In other words, until we fall into awareness. When we do, even for the briefest  of moments, there can be   an experience of all separation between subject and object evaporating. There is knowing without a knower, seeing without a seer, thinking without a thinker, more like impersonal phenomena merely unfolding in awareness. The viewing platform centered on the self, and therefore self-centered in the most basic of ways, dissolves when we actually rest in awareness, in the knowing itself. This is simply a property of awareness, and of mind, just as it is for space. It doesn’t mean that we are no longer a person, just that the boundaries and the repertoire of being a person have dramatically expanded, and are no longer limited to the separation we conventionally inhabit that has me in here and the world out there, and everything centered on me as agent, as observer, even as meditator.

The larger, less self-oriented view emerges as we venture beyond the conventional boundaries of our five senses into the landscape, or should I say “spacescape” or “mindscape” of awareness itself, or what we might call “pure” awareness. It is something we have all already tasted to one degree or another in some moments, however brief, even if we have never been involved with meditating in any formal sense. But the degree to which we can inhabit a subjectless, objectless, non- dual awareness (where there would no longer be an “us” who is “inhabiting” anything) increases as we give ourselves over wholeheartedly to attending. It can also be revealed to us suddenly in moments when conditions are ripe for it, often catalyzed by intense pain, or, more rarely, by intense joy. The I-centeredness falls away, there is no longer a center or a periphery to awareness. There is simply knowing, seeing, feeling, sensing, thinking, feeling.

We have all tasted the boundarylessness of awareness on those occasions when we were able to suspend our own point of view momentarily and see from another person’s point of view and feel with him or her. We call this feeling empathy. If we are too self-absorbed and caught up in our own experience in any moment, we will be unable to shift our perspective in this way and won’t even think to try. When we are self-preoccupied, there is virtually no awareness of whole domains of reality we may be living immersed in every day but which nevertheless are continually impinging on and influencing our lives. Our emotions, and particularly the intensely afflictive emotions that “sweep us away,” such as anger, fear, and sadness, can all too easily blind us to the full picture of what is actually happening with others and within ourselves.

Such unawareness has its own inevitable consequences. Why are we sometimes so surprised when things fall apart in a relationship when our own self-centeredness may have been starving it of oxygen for years while preventing us from seeing and knowing what was right beneath our noses the whole time?

Awareness can feel as if it expands out in all directions from a center localized within us. Therefore, it feels as if it is “my” awareness. But that is a trick our senses play on us, just as with the feel-  ing that everything in the universe is in relationship to our location because we happen to be here looking out. In one way, perhaps awareness is centered on us, in that we are a localized node of receptivity. In more fundamental ways, it is not. Awareness is without center or periphery, like space itself.

Awareness is also non-conceptual before thinking splits experience into subject and object. It is empty and so can contain everything, including thought. It is boundless. And above all, amazingly,  it is knowing.

The Tibetans call this fundamental quality of knowing “mind essence.” Cognitive neuroscientists call it sentience. As we have seen, no one understands it. In some ways, we know it is dependent on neurons, on brain architecture, and the infinite number of possible neuronal connections because you can lose it with certain kinds of brain damage, and because animals seem to have it as well to varying degrees. In other ways, we may just be describing the necessary properties of a receiver that allows us to tap into a field of potentiality that was here from the beginning . . . for the very fact of our consciousness means the potential for such was here from the beginning, whatever “beginning” might mean.

In other words, knowing has always been possible because otherwise, we wouldn’t be here to know. This is the so-called anthropic principle, invoked by cosmologists in their dialogues about origins and possible multiple universes. Speaking modestly, we might say that we are at least one avenue this universe has developed for knowing itself, to whatever degree that might be possible, even though there is no volition involved or cosmic “need” for evolution or consciousness.

With such an inheritance, it might be useful to explore the apparent boundaries of our knowing of ourselves, not as separate from nature, but as a seamlessly embedded expression of it. What greater awareness has no center and no periphery

adventure is there than to adventure in the field of awareness, of sentience itself? Just because science suggests that our awareness— as Steven Pinker puts it in his book How the Mind Works, “the most undeniable thing there is” [although it is not a thing]—might be forever beyond our conceptual grasp, that should not deter us in the slightest.

For there are ways of knowing that go beyond conceptualizing and some that come before conceptualizing. When awareness experiences itself, new dimensions of possibility open up.

We can dramatically increase the likelihood of awareness experiencing itself through the intentional cultivation of mindfulness, by learning to pay attention non-conceptually and non-judgmentally, as if it really mattered—because it does.”

Liked this excerpt? Buy the full book, Meditation is Not What You Think today.